An email will be sent to you.Tiqets is an independent company.

The emblematic monument of Barcelona.

Discover, with your Sagrada Familia ticket, this emblematic monument of Barcelona. The Sagrada Familia Basilica, designed by the famous architect Antoni Gaudí, is now the most visited building in Spain. Every year, it attracts more than 3 million tourists who come to admire this unfinished architectural feat. Construction began in 1882 and is still underway, with completion expected around 2030. This particularity of the Sagrada Família does not take away from the magic of the place. On the contrary, a visit to this monumental basilica plunges us into an extraordinary universe!

To better organize your visit to the Sagrada Família, we recommend that you buy a ticket in advance to avoid waiting in line or being denied access due to the large number of visitors.

(Covid info: after being closed to the public, the Sagrada Família Basilica has since reopened its doors. Nevertheless, the attendance quotas are, naturally, more limited than in normal times. That’s why it’s important to buy a ticket, as we explain in this article. In addition, the visit is carried out, for a period still uncertain, in an established direction of traffic, and the Sagrada Familia museum is not accessible for the moment). 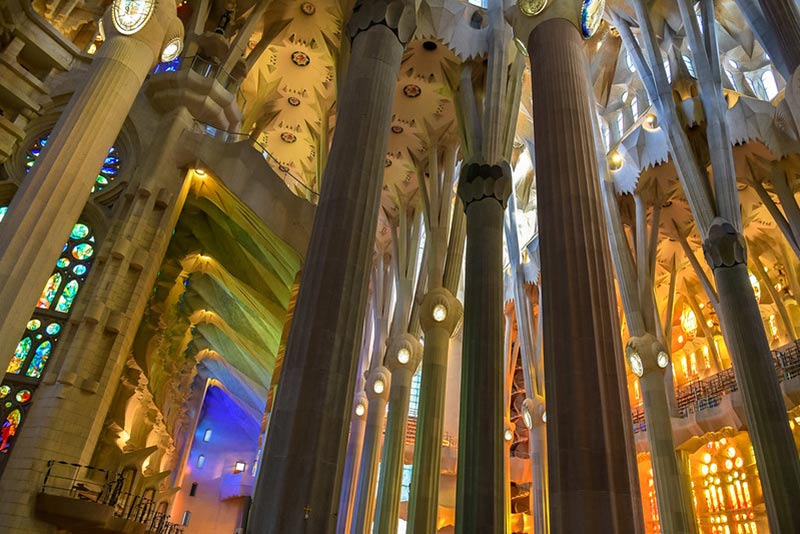 The work of a lifetime, the monument of a city.

If the Sagrada Família contributes to the influence of Barcelona, it is largely due to the genius of Antoni Gaudí, who devoted his life and passion to the realization of this basilica Sagrada Família.

The Catalan architect was only 31 years old when he inherited the project to build a church dedicated to the Holy Family. He abandoned the classical style of the first architect, Francisco de Paula del Villar y Lozano, to give free rein to his imagination and let his audacity speak for itself. The architectural ambition was so great that Gaudí himself knew that he would never see the building completed.

Following his accidental death in 1926 – Gaudí was hit by a streetcar – it was his assistants who supervised the work. However, in 1936 an arson attack destroyed the architect’s studio, where most of the plans and models were kept. From that moment on, the construction projects continued to build the Sagrada Família Basilica, remaining as faithful as possible to the spirit and wishes of Gaudí. 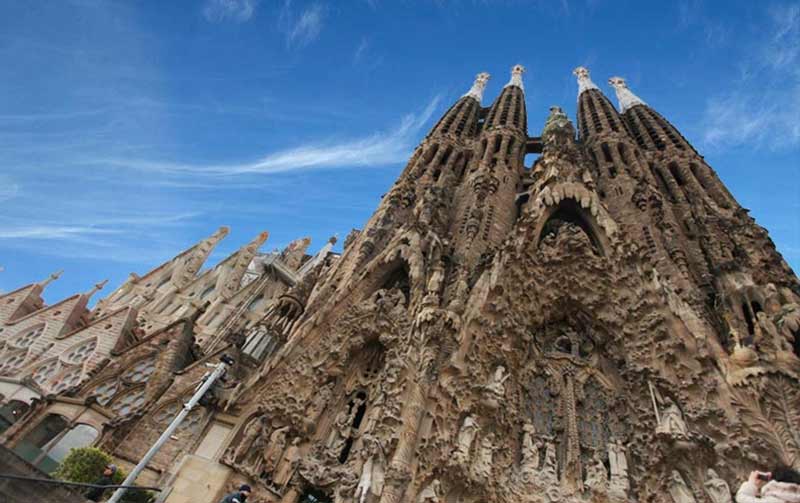 Visit to the Sagrada Família.

With your Sagrada Família ticket, you will discover a unique monument whose monumental dimensions and architectural finesse are due to the genius of Gaudí. The visit to the Sagrada Família Basilica begins on the outside, with the three facades that make it up. Each one represents a moment in the life of Christ, and is characterized by a singular style. The interior of the Sagrada Família Basilica, on the other hand, immerses you in an incredible universe and offers special visits, such as the museum or the towers. The Nativity façade, completed during Gaudí’s lifetime, represents the earthly life of Christ. The abundance of motifs and ornaments on this façade is explained by the fact that the architect wanted to symbolize the power of divine creation and, in particular, the life from which it comes. You can see references to Christian figures, animal and plant representations, and scenes from the Bible. The facade of the Nativity is also a UNESCO World Heritage Site.

The Passion façade, this time, represents the sacrifice and death of Christ. For this part of the Sagrada Família basilica, for which Gaudí only imagined the model, the Catalan architect wanted a much more austere style. In his own words, Gaudí even wanted the Passion façade to frighten the observer.

The facade of the Glory, on the other hand, has seen its construction started only recently. Therefore, it is still unfinished. In continuity with the other two facades, which represent a moment in the life of Christ and a characteristic of Creation, this one is, as its name indicates, the glory of Christ and represents the Whole of Creation, that is, the origin and end of humanity.

Inside the Sagrada Família Basilica, you will be immersed in a fantastic universe, thanks to the wonderful atmosphere imagined by Gaudí, and the harmony of colors visible when the light passes through the stained glass windows of the Sagrada Família. In the light and airy apse, religious motifs are mixed with vegetal figurations, such as the columns supporting the building in the shape of tree trunks. A real spectacle for the eyes!

Once inside the building, you will have access to two of the many towers that make up the Sagrada Família. The visit to one of them requires a specific ticket, with access to the towers, but this extra charge is worth it! You can enjoy a magnificent view of Barcelona.

The first tower is the one located on the side of the Passion façade. It is the highest, with its 75 meters of height. The second one is on the side of the Nativity facade, and has a bridge that joins the other tower of the facade.

Be careful, if the ascent is done by elevator, the descent is on foot, by a rather narrow staircase. Therefore, people with reduced mobility cannot enjoy this visit.

In the basement you will find the Gaudí museum, where you can see original drawings by the Catalan master, photos tracing the long evolution of the construction and detailed explanations on the project.

This level of the building also houses the research laboratory of the architects who are still working on finishing the Sagrada Família.

Due to the large number of visitors who visit the Sagrada Família Basilica every day, and the quotas that limit access, it is highly recommended to buy your tickets online beforehand. Not only are these tickets less expensive than on site, but above all you will avoid a queue that can take over an hour. When buying tickets, you should specify in advance the day and time you wish to visit. We advise you to favor a time in the morning, and to get there about ten minutes before the time indicated on your ticket to anticipate the security checks at the entrance.

Admission is free for children under 11 years old.

Please note: Children must still purchase a ticket and be accompanied by an adult. Admission is also free for disabled persons and their companions. Proof of disability must be presented.

The rates are reduced for people under 30 and over 65. The former even receive a 50% discount for visits between 4:00 pm and 6:00 pm on Wednesdays, Thursdays and Sundays, but you must go directly to the ticket office of the Sagrada Família Basilica.

The visit to the Sagrada Família is suitable for wheelchairs and people with reduced mobility, except for the tours of the Basilica, as the descent must be made on foot.

Once you have your Sagrada Família ticket in hand, the place offers a locker system to deposit your belongings. However, remember to bring a token or a one-euro coin to use the lockers.

Discover other great monuments such as the Park Güell, BCN Citypass, the Colosseum, the Torre Belém, Basilique Sagrada Família, le Louvre Museum, Aquarium Valencia. Basilique-sagrada-familia.com does not depend on any official body.